A Period of Stability?

Canon McGonagle retired back to his native County Donegal in 1983, He died peacefully in the parochial house at Culdaff on 2nd September 1996.

Canon McGonagle was replaced as Parish Priest by Father Richard Dunphy. The final Curate, Father Fitzgerald, also left in 1983, leaving Father Dunphy to shoulder the responsibilities of the parish alone.

The lighting in the church was again upgraded (this time the original pendant lights were removed), the sanctuary light was replaced, the reredos was altered and the whole church was decorated. 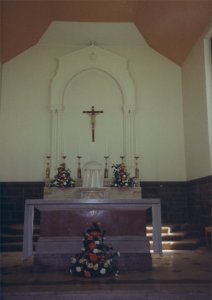 In 1992 Father Dunphy was replaced at Upton by Father Ivan Burke.

Father Ivan set about re-vitalising the parish community. He organised trips for the parishioners, started an annual |Passover meal and instigated a number of parish groups. He opened up the altar to the congregation by removing the altar rails and he had the knave carpeted.

It was on New Year's eve 1999 that Father Ivan learnt how seriously ill he was and he died on the morning of 14th February 2000, the day that his treatment was due to start. His Requiem Mass was celebrated at St Michael and All Angel's Church, Woodchurch and was concelebrated by Bishop Brian Noble (himself recovering from a serious illness) and most of the priests of the Diocese. He was later buried in Frankby Cemetery.

At the time of Father Ivan's death, a Missionary priest, Father Roger Clarke, had come to stay with Father Ivan for a short break from his work, but he arrived to find he had to take on the organisation of the funeral of a brother priest and to comfort the parishioners who were suffering from shock and grief.

St Joseph's first permanent Deacon, the Reverend Peter Jackson, was ordained in the Cathedral on 15th July 2000 and immediately set to work giving much needed support to Father Clarke.

Father Peter took a great interest in the youth of the parish. Each year he took a group to Lourdes where they gave their time and energy to the sick as well as having a lively holiday. This same group assisted with parish functions throughout the year. 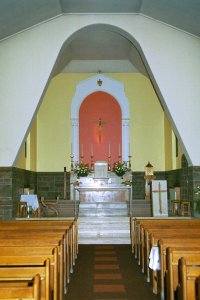 Father Peter retired in 2009 and was replaced as Parish Priest by Father Roger Clarke, the missionary priest who had looked after the Parish following the death of Father Ivan in 2000, now returned from his time in Bolivia.