Following the death of Canon Dallow, Father Edmund O'Connor came to Upton in 1917. He was a jovial and kindly man who soon won the hearts not only of his own parishioners but also of everyone in the village, including the ministers of the other churches.

When the war ended he had a brass tablet fixed to the wall of the Chapel containing the name of every boy of the parish who had laid down his life, and headed by the name of Canon Dallow.

In 1919 a mission dedicated to Our Lady and St John was opened at Heswall, this gave a little more room in the church.

Father O'Connor had a remarkable understanding of children and loved to be with them; as soon as he appeared in the village they surrounded him. He visited sick Uptonians in hospital, especially the children and would think nothing of travelling to Liverpool, a long and difficult journey in those days, to visit a sick child. 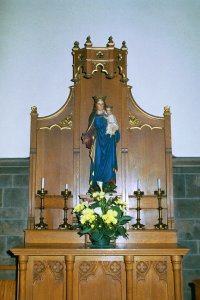 Father O'Conner commissioned the building of the oak altar of Our Lady, which stood at the front of the Mission Chapel. This altar was later moved to the new church.

In April 1929, shortly after the golden jubilee of his priesthood, Father O'Conner died following a heart attack. His long funeral procession passed through a silent mourning village of closed shops and drawn blinds. The Reverend Canon Bellamy, then vicar of St Mary's, stood outside his church and failed to hide his tears as the cortege passed by. Father O'Conner was buried, at his own request, in Salacre Lane Cemetery - the only priest to be buried in the parish. 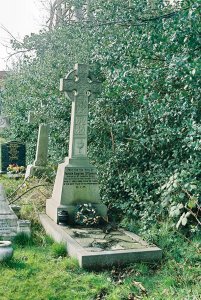 "It is with a real sense of loss we would refer to the passing away of our old friend Father O'Conner, who endeared himself to all who knew him. It was his wish to be laid amongst his own people in our little churchyard, and we all shared in showing the respect we had for him by being present at the funeral"

Father John Porter came to Upton in 1929, he had been born in Dukinfield in 1880, he was educated at Urshaw and the English College, Rome and was ordained in 1909. Father Porter's first appointment as Parish Priest was at St Mary's Shifnal. He only remained at Upton for 2 years and in 1931 he moved to Our Lady's, Latchford. He died on 22nd August 1956.